by Oli Steidle & The Killing Popes 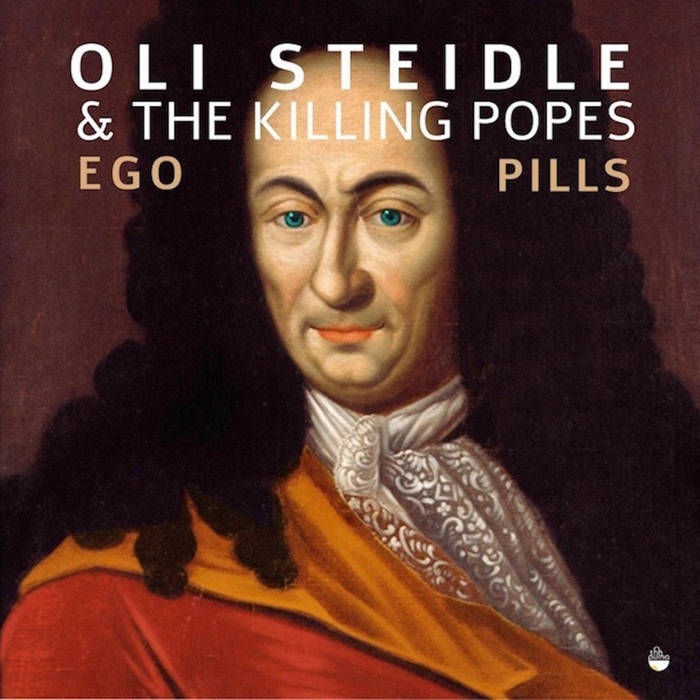 Ego Pills
Oliver Steidle’s musical origins are in Rock music which is why he feels a kinship with fellow drummers like Joey Baron and Jim Black, while he keeps John Bonham in the back of his mind. Many of his groups don’t have a typical jazz character: Der Rote Bereich, Klima Kalima, Philip Gropper’s Philm, Soko Steidle ... Peter Brötzmann, Trevor Dunn oder Alexander von Schlippenbach. He has unbridled fun with grooves and crooked beats. What’s going on? you might wonder, when you’re legs start to twitch. So it was high time to put a band together with music planned with the drums at its center, with meticulously notated beats and completely crazy rhythms where small melodies provide a supporting structure.
High time for Killing Popes. The drums unfold their enormous potential. Electronic Music, Ambient, Heavy Metal, HipHop, Grindcore, Techno, Punk, New Classical Music - in fast cross sections and connections, Steidle is looking for a new dynamic level at the pulse of the times. This is about much more than just overwhelming the listener. It is about the most subtle of entanglements, tough love, about one jump into unchartered territory after another. There Killing Popes have found their place.
Popes signify authority which the band’s name already dismantles and deconstructs. Killing also is a synonym for something being disarmingly great. The band’s name is as provocative and ambiguous as their music. If you shake up the letters, you get Ego Pills, the name of the group’s first and much-awaited CD. On it the group overcomes all ghettoized thought in music. Steidle found his ideal line-up with the two British keyboarders Dan Nicholls and Kit Downes, the baffling guitar professor Frank Möbus and the striking Saxophonist Philipp Gropper.
With them, Steidle puts into action a vision and music he thought up and produced with Petter Eldh four years ago. The choice of instruments was important for the sound he had in mind. A ping-pong of ideas can be heard which could be Punk if it were not played with such incredible precision. But these musicians are also great improvisers. It’s about getting under the surface, bringing tiny details to life and illuminating meters and metrics that run counter to each other.
Come with me!, this music calls out. It grooves, even if you might not be able to put your finger on the downbeat in most cases. There is a confluence of rushed and fast thoughts; then, around the corner, comes a sing-along-song; then again it goes to an altogether different place. In a collective process, emotions are brought to a boil. Listening habits are changing in these times of the global availability of everything. Everything is accessible at full speed. From this follows Killing Popes’ musical search in ever new drawers allowing everything of interest and thereby not losing sight of its own identity.
The mandated same-same and fixed laws of different musical styles are gone. This band is pointing to a way out and has to be celebrated for it. Gregor Schiegl of the Süddeutsche Zeitung heard "melodies they throw into the room just to shoot them down like clay pigeons", Stefan Pieper "a firestorm of humorous deconstruction“. An early statement on the Popes’ music was written by Nic Jones in New York's All about Jazz: "The Killing Popes are an outstanding example of what jazz is today!"
"Freedom is a huge form of responsibility," says Oliver Steidle. In the middle generation of musicians which Steidle is a part of, the experience of countless concerts meets a vital curiosity. This greed for new things allows him to plough larger fields in a zapping fidgety present. To not easily adapt there, but to navigate between the scenes is the great art of Killing Popes. It's about a lived life in the presence of clicks and links, about autobiographical points where the direction changes. It's about everything or nothing. Ulrich Steinmetzger

Oli Steidle is one of the most exciting and innovative musician on the european Jazz/Avantgarde scene since more than 15 years. Working with Der Rote Bereich, Peter Brötzmann, Aki Takase, Trevor Dunn , PHILM and as a leader for stylistically different bands made him one of the few most wanted musicians. This highly noted album underlines his individual vision in music. ... more

Bandcamp Daily  your guide to the world of Bandcamp